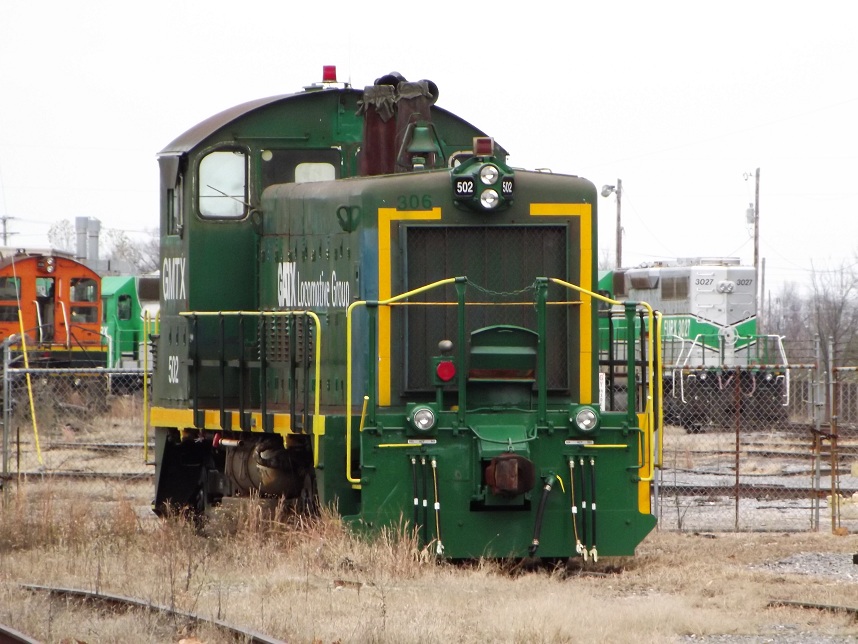 Green GMTX 502, ex EJ&E 306. Notice how you can make out the old number by the headlight due to faded paint. The blue tinted panel is a reflection from the low light and not helped by the rather long zoom I was using. 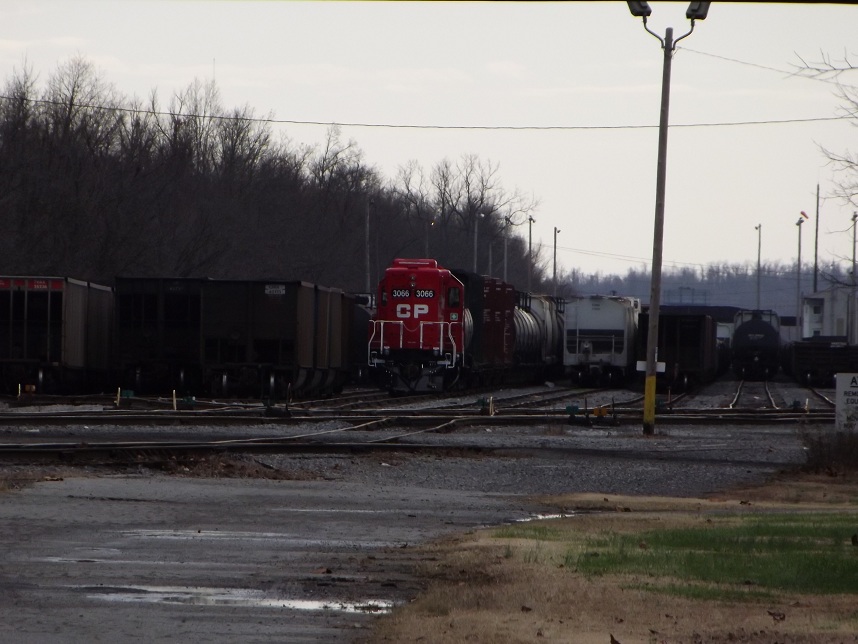 Another long shot. CP 3066 waiting to head home by way of the CN. In hindsight I should have walked closer as it would turn out there was no accessible side views from alongside the yard since the yard was full. Not visible but I was under the Irving Cobb bridge when I shot that, giving the appearance I was at the end of Cleveland St. 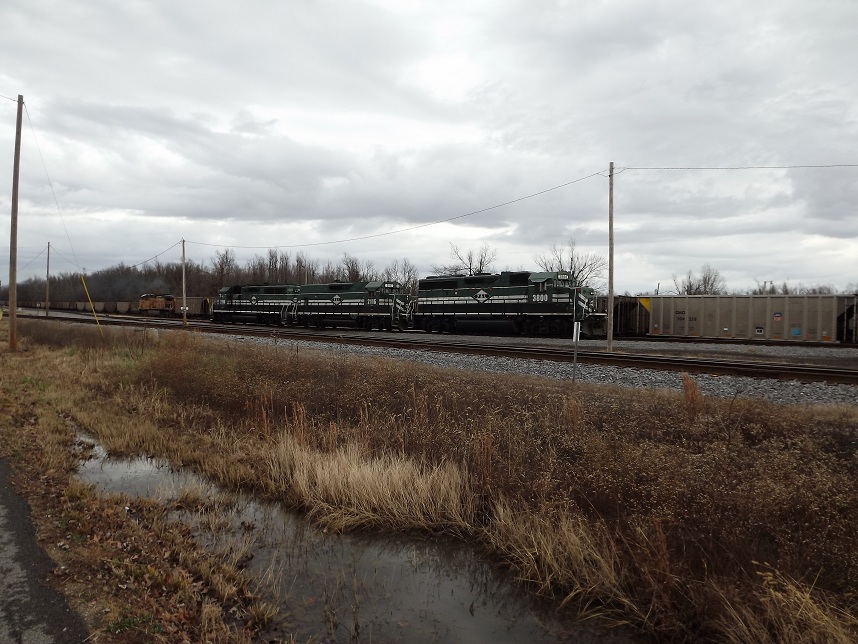 PAL 3800 2115 and 2116 sit on the scale track waiting for another coal train from the CN. About three years ago the CN stopped running their power though on KY lake bound coal trains ending the tradition since the first day of PAL’s operation. 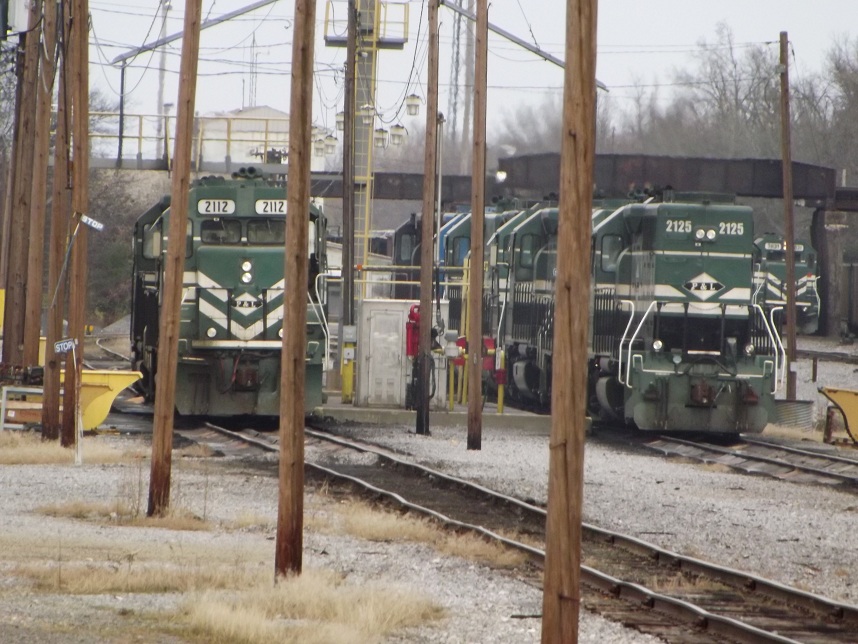 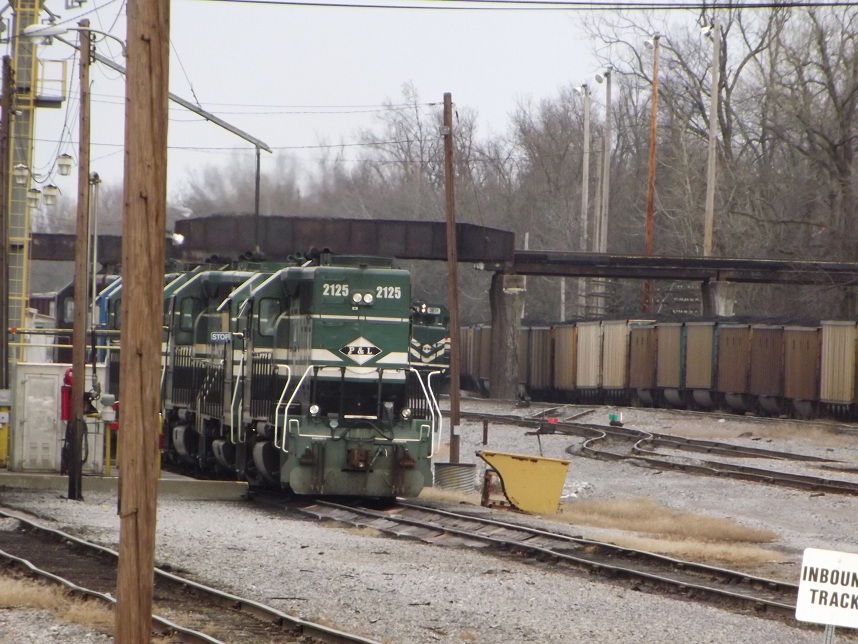 Looking toward the North and south Yard switching leads. The overhead bridge is for the P&I railroad to get over the yard. 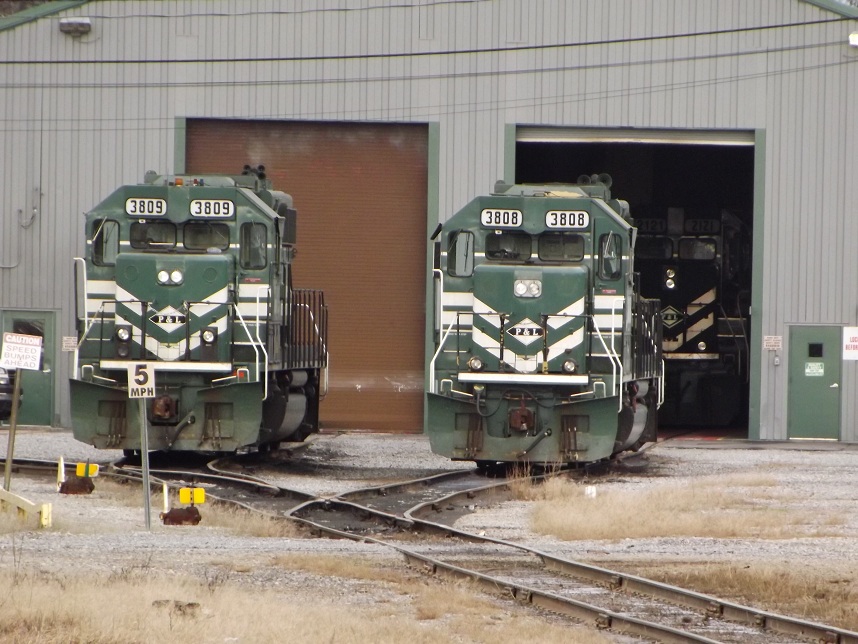 In front of the engine house is the 3809 and 3808 with the 2121 inside. When they left EMD these 3800’s were identical. Hopefully the speed bump sign is for the access road and not the wye. 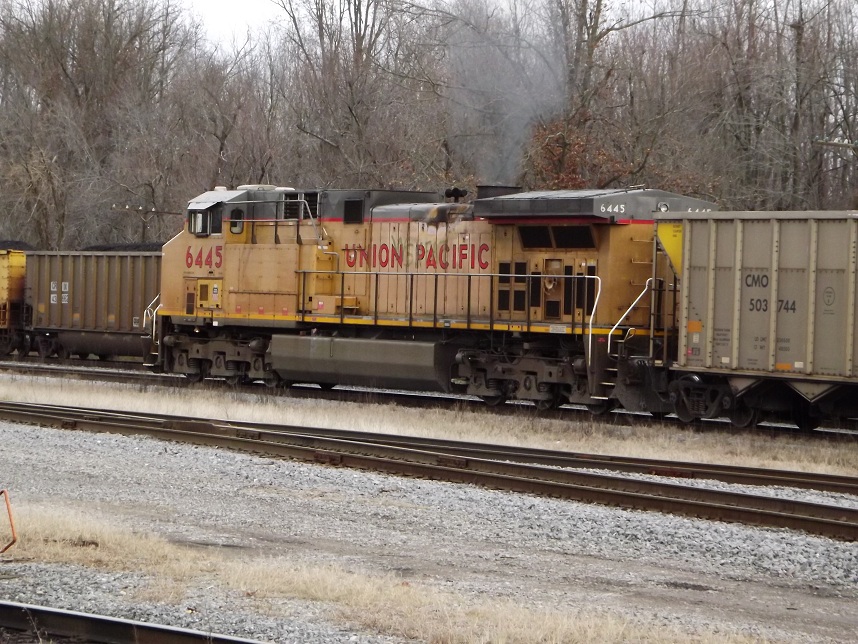 UP engine smoking it up in South yard track 1. There seems to be a few constants about GE locomotives, there “low emissions” engines smoke like a steam locomotive, have evidence of fire damage, and speed control seems to be just on or off so they run slack like battering rams. Track 1A, which has the other UP coal train in the background, track 1, 15 & 16 are used for holding coal trains. There is a CSXT powered coal train behind me. The crew was getting ready to depart so I was hurrying to get into my position to get the shot at a different spot. The UP train would be following the CSXT train but would have to take the scenic route past north yard while the CSX train could take the shorter south yard connection. 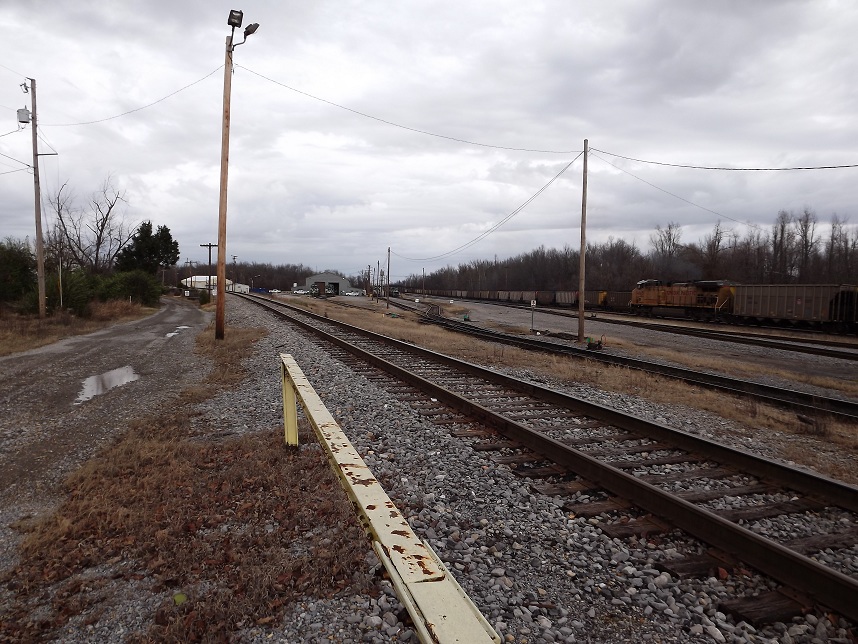 For those people wondering about the angles I was taking pictures from or how I got access to the shops, I didn’t get access to the shops. The shot is with no zoom taken from the public road that used to cross the yard leads. The track in the foreground is the South yard connector to the P&I. 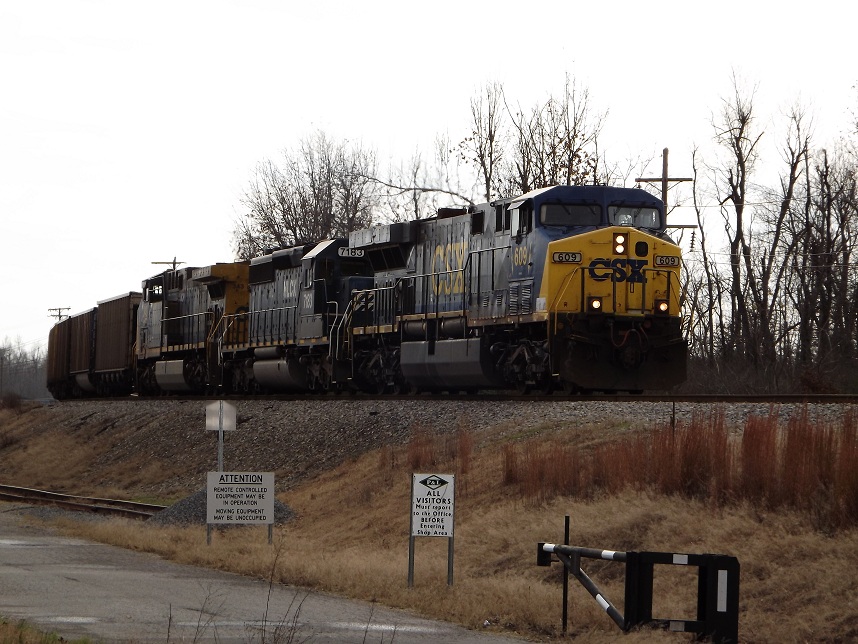 Locomotives CSXT 609 HLCX 7183 CSXT 343 lead a coal train out of Paducah. It’s unusual to see CSXT power this far west on the PAL. The train is headed to Sugar camp mine at Adkin Jnc. This mine is served by the EVWR and the CN. Sometimes it runs over the EVWR other times the PAL and unloads in Georgia. The location is South yard connector and the power is at the tightest curve on that stretch of track. Off to the left is the road to the PAL’s Paducah shops. The end of track on the lower level is the tail track for the wye at the engine house. 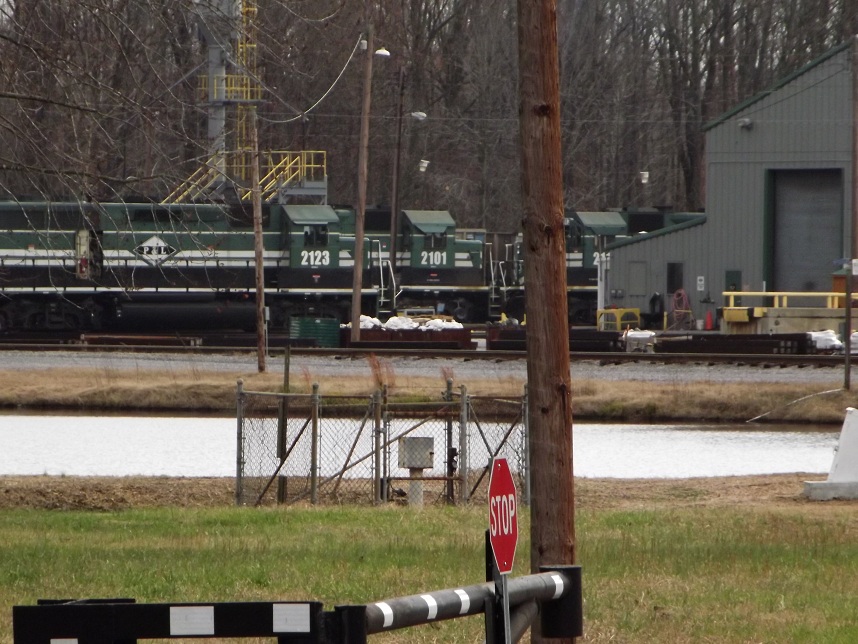 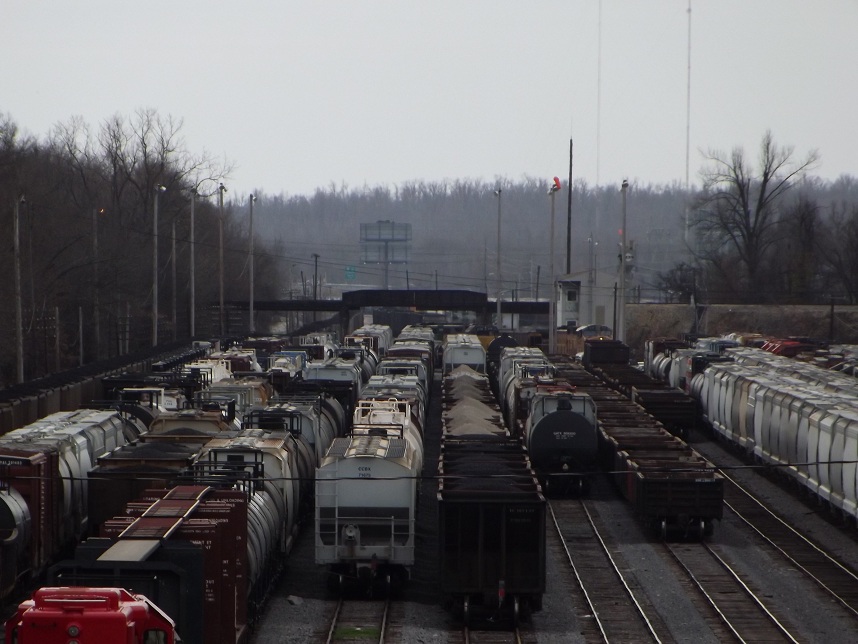 View overlooking North yard with south yard in the background. For those trying to grasp the perspective, The P&I bridge and yard tower is about 70 car lengths away the billboard facing away is in south yard in the yard ladder area and the green highway sign is at the south end of south yard in I-24. Some of the things going on in the yard is the UP coal train making is way out of south yard, seen at the base of the tower and the Yard power standing by with the GMTX lease unit (yellow) and PAL unit (green) on the ladder. On the right edge of the picture is a line of unknown locomotives mostly red or Grey waiting to head to one of the shops. Also in the foreground with the EOT was the last set of cars dropped off by the WPW train. They drop their whole train in the yard and leave with another set of cars and usually fresh power. 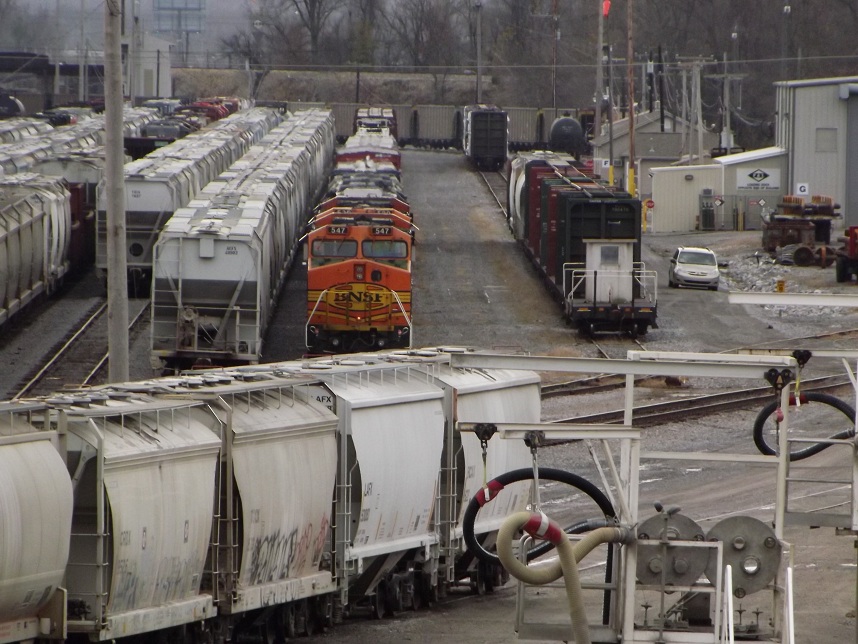 Better view of the “High” side of the yard looking toward the BNSF locomotives. The van is the taxi for the UP crew on the coal train which is making its way around the yard.